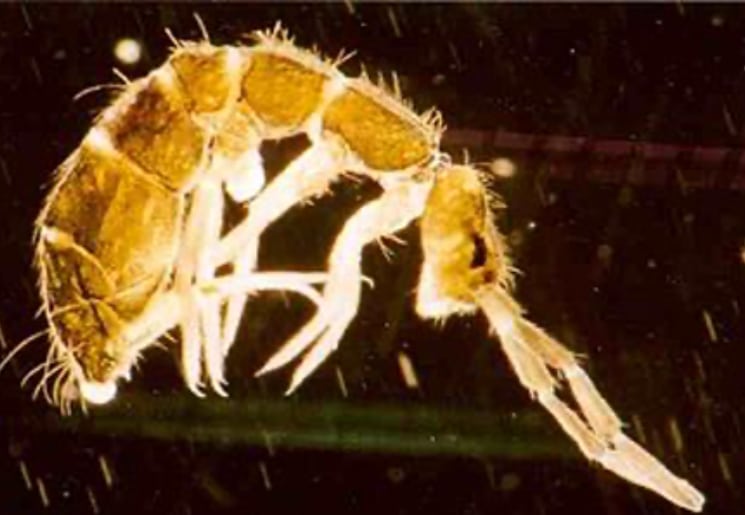 It’s the time of year when springtail infestation and other insect pests start to break out in large numbers. Even though the springtail is harmless to humans, it’s still a cause for concern if you spot these critters on your property. But why is this shy insect such a big problem inside homes? We’ll show you how to recognize a springtail infestation, as well as what it means and how to resolve the issue.

Even though they look scary, these so-called “snow fleas” don’t directly bother people. Instead, they feed on mold, mildew, and other funguses.

But that’s the problem: Springtails live in conditions that are far too wet for human comfort and safety. So, if your home is hosting a community of these so-called snow fleas, you should get help from a professional pest management team.

How to identify a springtail infestation

These insects have a scary appearance, but it’s not their fault. Since they’re often incorrectly described as “snow fleas,” people here in Tucson and throughout Arizona tend to fear them, even though they can’t bite humans.

This insect is small in size, usually between one-quarter of a millimeter to 6 millimeters in length. They’re multi-colored, so they’re difficult to see until they “jump.”

As their name implies, this insect moves by coiling then releasing a spring-like V-shaped extension at the end of the tail. This springing action is a defensive move, and it propels the critter about a foot in distance.

Since springtails can’t control where they jump, property owners are often surprised and worried when they land on people unexpectedly. However, it’s essential to keep in mind that springtails aren’t directly harmful to humans.

Still, they should be removed if found in your home, for the essential reasons explained below.

Why they’re living on your property

Springtails generally come around homes for two reasons: Usually, they’re looking for more water, but occasionally they’re trying to get away from too much water, like during the monsoon season.

Here in the Tucson area, they migrate into damp areas in homes, garages, and crawlspaces when outside weather is too dry to suit them. You’ll often find them gathered in large numbers in places where there’s constant dampness.

On the other hand, you’ll also encounter them after a rainstorm, or even after watering a garden, when they come out of hiding to escape flooding. We’re often called to remove them during the monsoon season.

Springtails aren’t bloodsuckers, but they’re a warning about other problems.

Even though they’re not a direct health threat, springtails are a nuisance that should be removed. The most crucial step is to fix the problem that led to the springtail infestation.

Usually, the source of this problem is in an area that’s always damp. In any case, our team can quickly resolve these issues.

We don’t hate springtails; we want to get them out of your property.

If there’s a problem with springtails, contact us for an inspection. Our expert team can identify any pest. We’ll prepare a comprehensive treatment program to correct the issue and make it less likely to happen in the future.

As mentioned earlier, springtails usually live outside, but they move inside looking for water during dry weather. So, a comprehensive solution needs to include treatments and perhaps also waterproofing repairs.

Most importantly, we always Integrated Pest Management (IPM) control measures. IPM is the practice of identification, implementation of non-chemical control if possible and treating the source of the infestation when products are needed. That way, you’ll have peace of mind in getting rid of the critters while knowing that kids and pets are safe.

Exterior treatments usually involve fixing water leaks and other areas that are always damp. For example, our pest management experts might recommend improving water runoff and drainage around a house or removing mulch or gardening materials too close to the home.

Likewise, interior treatments usually include drying out areas that are always damp. Keep in mind that these insects feed on mold, mildew, and other types of fungus.

That means any locations where springtails could find plenty of food are not healthy for humans or pets to live near. Interior treatments typically include drying out and treating damp areas, especially around sinks, tubs, and showers.

Stop a springtail infestation anywhere in the Tucson area.

The best way to get rid of springtails, fleas, and snow fleas and make sure they don’t come back is by calling us. We’re Arizona’s leading pest management company for treating springtail infestations.

If you’re having a problem with springtails, contact us today!

Get rid of the springtails