Fearsome looking bugs are plant feeders and harmless to humans! 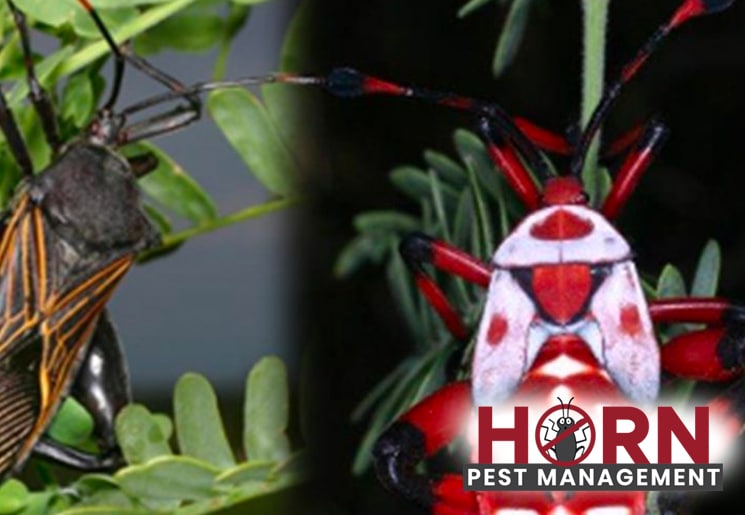 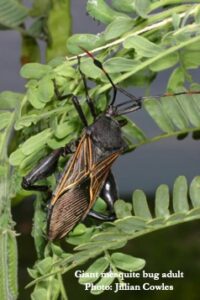 Giant mesquite bugs (Thasus neocalifornicus) are a common sight in desert southwest landscapes, particularly on mesquite trees during May-August. These impressively sized bugs may also be found on other garden and landscape plants. They cause no significant plant damage, are harmless to humans, and do not have a venomous bite or sting.

The adults are large, dark brown or black bugs, about 1 ½ -2 inches in length, they are one of the largest ‘true bugs’ (Heteroptera) in the southwest U.S. Despite the large size of adults, they have relatively small heads compared to their body size. Antennae are dark brown or black at the base, but the top two segments are colored dark orange or red and the second segment from the top has a distinct flattened, leaf-like enlarged area. Legs are black, with dark red patches or bands; the femora of the hind legs are enlarged with spines along the inner edge. Adult wings have prominent orange or yellow veins on a dark background. Adults are usually seen on mesquite trees in small groups and are slow, clumsy fliers. The insects are feeding on tree leaves but do not harm the tree. 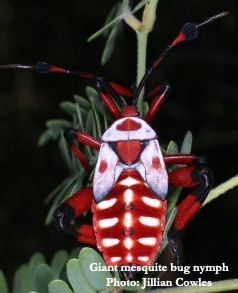 The nymphs (immatures) are patterned with vivid red, yellow, white and black and change patterns as they pass through 5 molts before finally turning into adults in the summer. The leaf-like protuberance on the antennae is present in all stages. The nymphs are often seen in clusters, maybe giving the appearance of a larger animal to ward off predators. Adults and nymphs can occur together on the same trees, and may emit a foul-smelling defensive secretion when threatened.

Life history: Eggs are laid in chains under stems, leaves or loose bark on mesquite trees during late fall. The adults die soon afterwards, and the eggs overwinter and hatch in the spring. Every year about the middle of April, depending on temperature in southern Arizona, eggs begin to hatch on mesquite trees and small, strange, blue bugs appear in large numbers. Egg hatch coincides with the blooming season in mesquites. People don’t notice the insects until sometime in May when they are about an inch-long, red and white-banded insects with antennae that have an enlarged segment towards the tip. These odd-looking beasts are giant mesquite bug nymphs. The term nymph is used to describe the juvenile growing stage of insects that develop wing pads externally during this growth period. These brilliantly colored bugs stick together because their advertising is more effective in large groups. This seemingly dangerous exposure is Nature’s way of warning predators that these insects have some kind of defense. In this case, each nymph has glands that produce a smelly substance normally repugnant to predators.

Normally these insects live and suck plant sap from young stems and tender pods in the tops of the mesquites, but move towards the base of the tree as the temperatures rise. During years when the temperatures are high, residents may suddenly observed these bugs on the lower parts of the trees or on the ground in large numbers and panic can ensue. The bugs are trying to escape the extreme temperatures and as a result become more obvious to the casual observer. 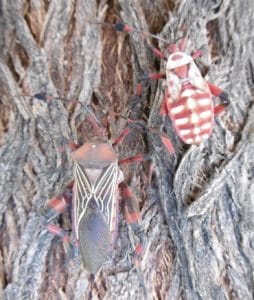 The adults can fly and are active June-September. Adults are more subtly colored, having olive-drab wings marked with creamy diagonal stripes. Their most striking features are the massively enlarged hind legs of the males, the reason they are classified in the leaf-footed bug family Coreidae. Females have enlarged hind legs, but are not nearly as robust as the male legs. The legs are red and black-banded. Adults also have the enlarged antennal segment as mentioned earlier. The adults mate and lay eggs on the mesquites in late summer, and then die.

The nymphs and adults have beaks for feeding on the juices of the mesquite tree. In the early stages, nymphs will pierce into leaves or petioles and take a drink. Adults will cluster on the seed pods as the preferred feeding site.

Don’t worry. The bugs and mesquite have evolved together and a relationship has been worked out so neither party suffers significant injury. The bug feeds enough to mature and probably helps stimulate more tree growth as a result of feeding.

We suggest that you enjoy your mesquite, and enjoy your giant mesquite bugs as well. 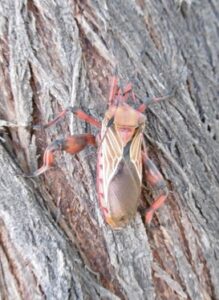 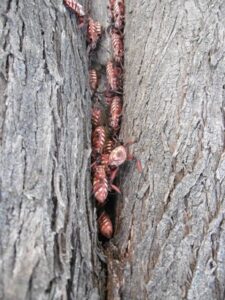 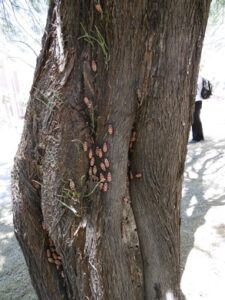 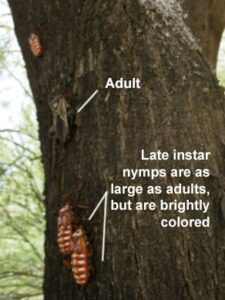