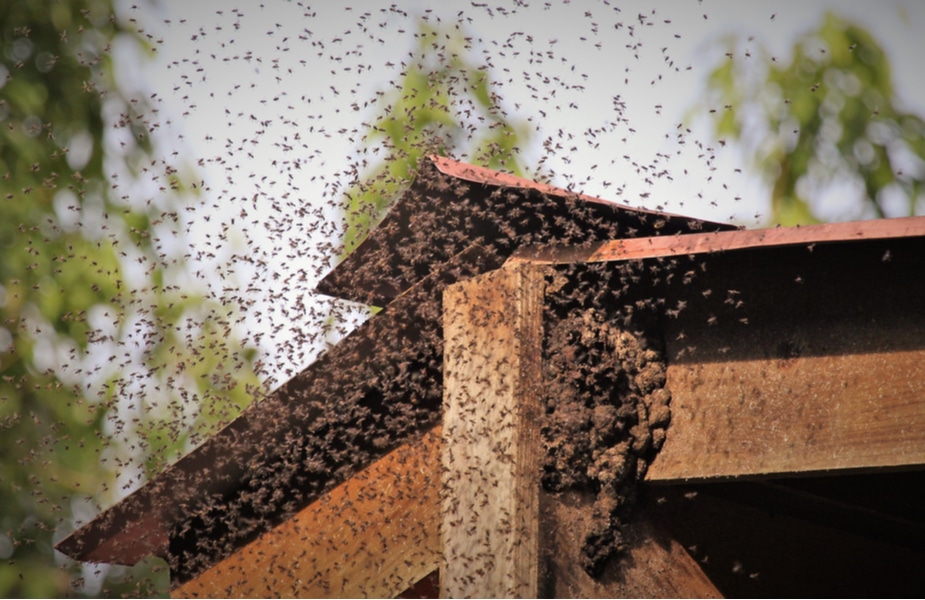 What you need to know about Africanized Bees

All bees play an important role in agriculture, but not all bees are the same. In the United States, we have more than 4,000 species of bees. That’s a lot of bees, but that represents less than 20 percent of the 25,000 different bee species across the world.

Bees are our friends for pollinating crops, flowers and trees. However, if they take up residence in your home or on your property, they pose a major danger, especially if those bees are among those bees that have become “Africanized.” Sometimes known as “African killer bees,” these pests have been blamed for the deaths of more than 1,000 people, along with countless pets, horses, and other animals around the world.

While these Africanized bees – a hybrid of East African lowland honey bee and Brazilian honey bees – are not common, they are definitely present throughout Arizona. Let’s take a look at what makes them dangerous and why professional intervention is so important in bee infestations.

Brought to Brazil in the 1950s as a species that would produce more honey in tropical temperatures, East African honey bees were first kept in closed conditions. Unfortunately, more than two dozen swarms – large groups of bees closely clustered when a colony moves to a new location — escaped in 1957. They started breeding with local Brazilian honey bees.
Africanized honey bees began moving northward. The first ones appeared in Arizona in 1993. Because they look very similar to the typical shy, quiet, “minding my own business” honey bees, these “killer bees” can be distinguished and recognize by their behavior. These are aggressive, territorial insects that attack in large numbers with surprising ferocity.

The killer bees’ aggressive defense of their homes cannot be underestimated. These killer bees will attack people or animals that accidentally come near their territory even when they are not being provoked or bothered. If you “trespass” into their area, vibrations from your footsteps and any noises can bring a ruthless attack. Killer bees can chase a person or animal for up to a quarter mile.

The sting from one Africanized honey bee has about the same potency of any garden variety honey bee. The problem is that this bee launches a response with hundreds or even thousands of attackers intent on stinging and chasing anyone crossing into their space. More than 1,000 stings can be fatal for the average adult; 500 stings can kill a child.

In Arizona, the peak season for bee attacks is the summer. With hot, dry conditions, there is less honey and the killer bees are more protective of their hives. If you do see a swarm of bees headed your way, run directly to a house or car and close all the windows. Fortunately, bees fly slowly; a healthy person should be able to run faster than they can fly. Don’t stop running – remember killer bees can follow you for a long distance.

In the United States about 100 people die from bee stings a year. Most die from severe allergic reactions to bee stings; some die from massive attacks from killer bees. Anyone with more than 30 bee stings, shortness of breath, or rapid or slowing pulse rates should seek immediate medical attention or call 911.

Bee professionals to the rescue

Fortunately, there are carefully trained professionals who can remove bees from your premises. If you see even a few bees flying from cracks or piles of wood or hear their buzzing indoors, you need to call bee control professionals right away. There could be beehives hiding in the vicinity. Africanized bees like to be near water, such as canals, irrigated areas, or ponds, but can show up anywhere. Bee specialists often find hives full of bees behind the walls of houses.

Whether or not the bees on your property are Africanized, the place for bees is in the fields, not your chimney, attic, garage, shed, or woodpile. A specialist can safely remove the bees and relocate the colony.

Even though these Africanized bees are aggressive, don’t kill the killer bees. Insecticides are not the answer to permanent removal of a colony. Bees are critical to farmers who depend on them for pollinating fruits and vegetables. With professional removal and relocation, the bees will not return.

For more than 40 years, people in Arizona have turned to University Termite & Pest Control to take care of their bee infestations. Their staff includes experienced pest control professionals who specialize in bee removal. Bee removal is a top priority call for University Termite & Pest Control. This is not the time for take chances; their procedures are efficient, thorough, and safe for you and your family.

Our world needs honey bees. However, you should never have to put up with bees on your property. Call University Termite & Pest Control for safety and peace of mind.