How to Differentiate Between a Springtail and Flea 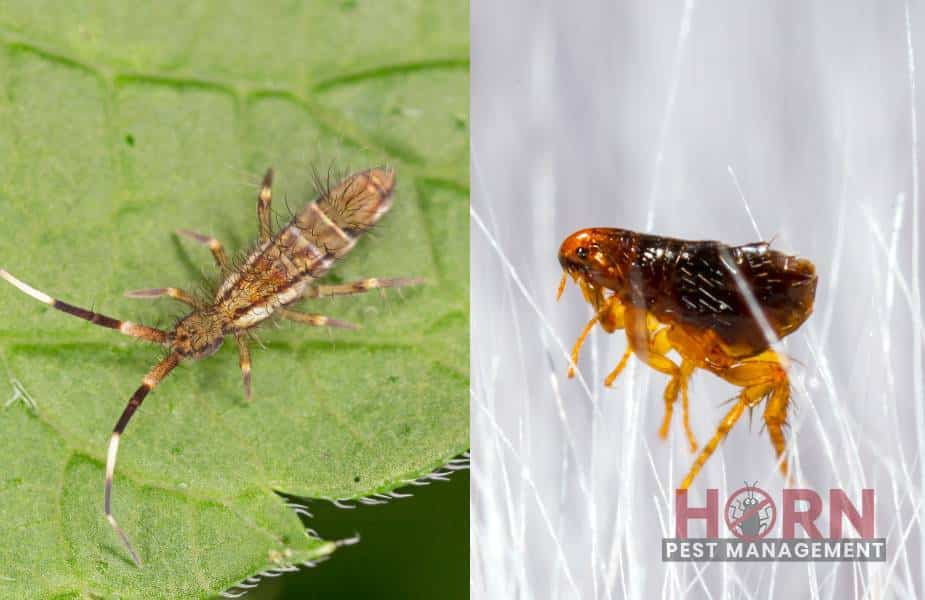 It is the peak time of the year when we get surrounded by two different types of fleas in the environment. The springtail, which is also known as snow flea, is usually a harmless insect, but the presence of this creature is a sign that your home has too damp conditions. However, the actual flea is a severe pest that can pose dangerous health consequences for pets and entire families.

So, now, the biggest question is how can you recognize which one of these insects has attacked your home. We may need to gather more information about these fleas to know this.

Difference between flea and springtail:

Tucson is known to have a favorable climate for the survival of all kinds of critters and pests. As a result, it is common to see several insects in this environment, including fleas and springtails that appear in huge numbers during early winter and falls.

When we see from a distance, fleas and springtails appear almost similar. They are usually small in size, and both can jump. Unfortunately, they have a terrible tendency to show up in human living spaces with pets. But most homeowners fail to recognize if they have fleas or springtails at their home.

If we talk about fleas, they are some tiny wingless insects having reddish-brown colors with a dark appeal. If you feel its presence between your fingers, you may notice a flat shape from the top to the bottom of this flea. This adaptation allows these insects to move along and below the fur of their hosts.

A flea has solid and thick legs. It allows them to travel up to longer distances quickly when needed. Unfortunately, actual fleas can be found in almost every corner of Arizona, and they pose a severe threat to the health of humans and pets. We all know that adult fleas are scary, blood-sucking parasites, and they have sharply pierced mouthparts that can further cause severe biting and sucking on the skin.

Homeowners prefer to call pest control experts to deal with these fleas during the fall months. In most cases, the infestation is reported to start with the pets. Although these furry friends spend most of their time indoors, they can catch ticks and fleas even during a single walk outdoors. After entering your home, they will hide at an uninterrupted location to allow their larva to develop. Later you will find them in the bulk population at your home.

On the other hand, Springtail is a multi-colored insect instead of the dark brown color of the flea. It is widely known as snow flea, and these creatures are known to have stout legs that help them jump efficiently.

As their name says, they move by coiling while releasing some spring-like appendage by the end of the tail. Experts call this V-shaped appendage a furcula. It is capable enough to propel the insect with a considerable speed of 4 feet/second. Their maximum jumping distance with this technique turns out to be 100 times the length of their body.

In practical terms, the springtail can jump up to 12” with its standard escape move. However, you will be surprised to know that the landing direction of this insect is usually random. In simple words, this snow flea doesn’t have any control over landing location. As a result, it is common to see people feeling frightened when this insect randomly jumps on them, although it is known to be harmless as it cannot bite.

When they develop into adult fleas, these insects may wait for some warm-blooded host around and quickly jump over that to feed on the new body. In this way, they get ready to generate another population of eggs. If they are not treated on time, they can badly invade your property while posing severe harm to the pets and kids.

Take help from experts to solve flea problems at your home:

Whether you are experiencing trouble due to real flea or springtail at your home, it is better to get help from experts on time to deal with the infestation. These creatures are commonly found in buildings with high moisture content. Moreover, you can find them in the woodpiles and gardens or sometimes under the stones and logs. Although they live outdoors for most of their lifetime, they get inside living spaces to find some dampness.

Whenever you feel springtail infestation on the premises, it mainly originated from too-determined reasons such as a basement, bathroom, kitchen, or crawlspaces. These creatures love to feed on mildew and mold. As they do not bite, mainly not humans, springtails cannot be observed easily with naked eyes. But they are one of the most considerable trouble for homes with unhealthy living conditions in Tucson. People report their presence in the bedrooms, crawlspaces, and damp locations of the property.

The experts at Tucson Pest Control Company can help you eliminate these fleas from the living space with some proven and trusted methods. They can help you conduct a timely inspection of the entire area to locate the source of the presence of the colony. Moreover, they will recommend good techniques to avoid such troubles. We all know that fleas are painful and intolerable creatures; they may even harm our pets at home while causing frequent scratching with stingy bites. Therefore, it is essential to take timely action to remove fleas from your living space. The Tucson-based pest control company can eliminate fleas and evict springtails as well.