Buffelgrass: The weed that everyone has and no one wants 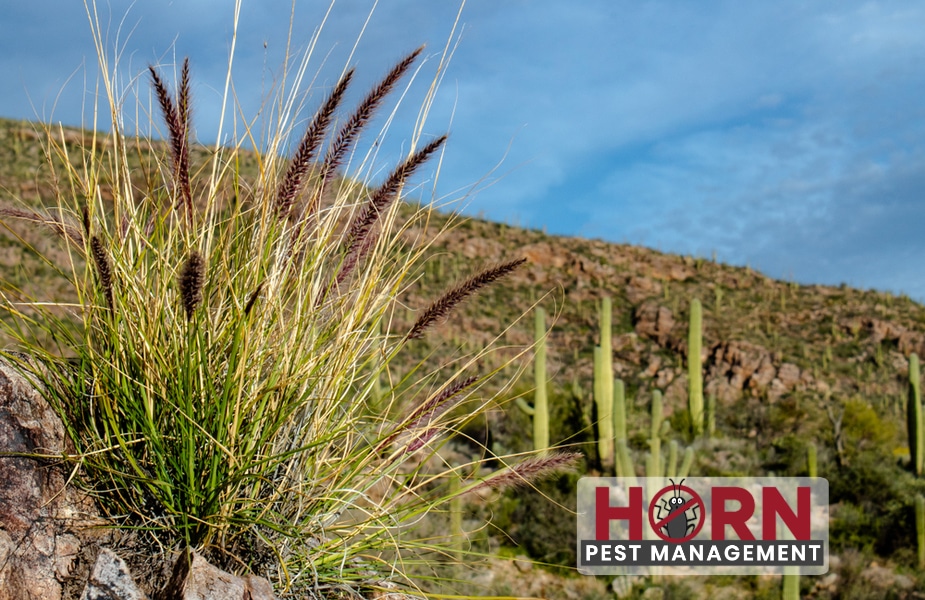 Taking up much of the image you see is a non-native weed called buffelgrass (scientific name: Cenchrus ciliaris). It looks so familiar because it has been so invasive in the Sonoran Desert and is built to survive in this environment.

It is hard to believe that this weed was introduced in Tucson and Phoenix back in the late 1930s for soil stabilization; now Buffelgrass covers about 45,000 hectares of Arizona.

Buffelgrass is a type of graminoid, or grass, that will grow to be over 3.5 feet and 3-4 feet wide. The roots grow to a deep level and can reach 6-8 inches into the soil. It does well in warm environments with little to no flooding and a lack of frost in the winter. You can see why Tucson is a warm and welcoming place for this pesky weed!

The seeds live on the bristles at the apex, or top of the highest branch, and are high in count to allow for easy pollination of the nearby regions. To spread as much as they do, they grab hold of anything that passes, such as animal fur, clothing, and shoes. The environment also contributes to the spread by carrying the seeds in water and wind. The seeds will emerge when the plant “flowers” which typically happens from spring to fall, but can happen after any rainfall!

Where did Buffelgrass come from?

Buffelgrass was brought to this arid zone of the US to allow cattle to forage and erosion control somewhere between the 1930s and the 1980s. It came from Africa, Asia, and the Middle East and can survive in these environments due to the high number of seeds produced and low water intake.

Why you don’t want buffelgrass to stick around…

Because buffelgrass is adapted to dry environments, the plant itself is very dry and acts as kindling. This weed will catch and spread fire very easily and very rapidly, bringing it to your home or business if not extinguished in time. Aside from fireworks, it will catch fire at any point in time and wreak havoc where it goes.

Buffelgrass is a large component of local fires and will pass it on to other plants, buildings, and homes. This weed burns hot and spreads quickly, reaching the area of a soccer field in less than a minute if started in just a small area. Buffelgrass will quickly turn into a blazing inferno, destroying everything in its path.

Another reason that this plant is considered a weed is its competitive nature. Since buffelgrass is not native, our local plants don’t know how to ward it off. It is very good at dominating resources and will consume more than its fair share of nutrients from the soil, water, and space to grow. Buffelgrass has a short life and will grow rapidly to produce seeds at an incredible rate, with seeds capable of remaining viable in the soil for up to 10 years. Buffelgrass can reproduce both sexually and asexually, but it is mostly asexual reproduction through fragmentation that causes this plant to spread easily into new areas.

Lastly, although not generally harmful to livestock or humans, buffelgrass can leave harsh burns when touched by bare skin. It should always be handled with a great amount of care. Buffelgrass, although one of the more common pests in Phoenix and Tucson, is relatively easy to deal with if you are aware of it and its methods of dispersal. Buffelgrass should not be ignored or left unchecked; this plant can spread quickly into new areas.

How to get rid of buffelgrass

Buffelgrass is a very hardy plant and will require several methods to be taken care of. Buffelgrass can be economically managed through spraying herbicide. A professional team should be brought in to adequately apply any herbicide as it can be applied incorrectly and be ineffective. In some instances, buffelgrass must be treated 2-4 times per year. It is most effectively controlled with herbicide if it is sprayed in the early spring after the rains start.

While some are tempted to simply dig this weed up, that is not recommended. As mentioned previously, the seeds are very easily spread and will be transferred on shoes, clothing, and the wind, especially if rustled about in an effort to remove them. The seeds can reproduce the plant years after it has flowered, so complete and professional removal is imperative.

How you can prevent buffelgrass

The only act that can be taken to prevent buffelgrass from returning, or ever coming to your land, is to treat and retreat the area. A team should be brought annually to treat the area for several years after the buffelgrass has initially been removed. This is due to the seed being viable for years after leaving the plant. Treatment can also be provided during the growing season if annual treatment is not adequate to suppress the spreading plant.

Any noticed buffelgrass needs to be identified and dealt with before any spread. This can be done by calling and sourcing professionals to treat the surrounding land, preventing further spread, and then to move to the area of concern and eradicate the pesky weed as soon as possible. This is to be done as often as needed.

Who can remove your buffelgrass?

While Google can tell you ways that they think you can remove buffelgrass yourself, it is not a permanent fix. You can increase the severity of the infestation or harm yourself by trying to save a couple of bucks. You should call in for some help.

If you live in the Tucson area, as a friend to find out why you can rely on Horn Pest Management to erase any pest in or around your home, including treating and preventing the extremely flammable buffelgrass. If you see buffelgrass in your area and aren’t sure where to start, head over to the ‘Contact’ section and tell us what you know. We take care of the rest.